Psoriasis is incurable, but there are different options to improve the symptoms of the disease, or even to suppress them completely.

There are different therapeutic options, depending on the severity:

This treatment covers all measures in which the skin is externally medicated: ointments, creams, solutions or shampoos, for example.

Vitamin-D products specifically act against cornification and interfere with the inflammatory process. They are highly effective and well tolerated at the same time and are currently the standard for the topical treatment of psoriasis.

Corticosteroids (Cortisone-like products) have a predominantly anti-inflammatory effect. Today's corticosteroids have almost no undesirable side effects, provided that they are applied correctly and are very well tolerated.

These preparations contain the two active substances vitamin D3 analogues and corticosteroid, mixed in a single tube. In this combination they lead to faster improvement of the psoriasis than the single substances and are only applied once daily

One of the oldest products for the treatment of psoriasis is tar. However, the acceptance is limited in many patients, because the treatment leads to an increased sensitivity of the skin to sunlight; the products have an unpleasant smell and discolouring affect and may not be used during pregnancy and lactation.

Dithranol is a synthetic product, similar to tar.
The treatment is very effective. Dithranol is particularly used for inpatient (day) treatment in hospitals, because the application in outpatient settings is limited due to skin irritations and discolouration of skin and clothing.

Tazarotene, a derivative of vitamin A acid, is no longer commercially available. It has an effect on the formation of scales and inflammation. It may not be used during pregnancy and lactation.

It has been known for a long time that UV irradiation can prevent the proliferation of inflammatory cells on the skin. For example, Leviticus describes even in the Old Testament that lepers experienced healing of their leprosy after sunbathing. Conventional phototherapy of psoriasis fundamentally uses two different principles.

The experience of many patients shows that sunlight often has a significant positive effect on the psoriasis. The UVB radiation portion of sunlight with a wavelength of 280-320 nm is responsible for this. A wavelength of around 310 nm exhibits the optimum effect; equipment is used for this, which radiates as much UVB light as possible in this wavelength range. The exact dosage is important for preventing an increased risk for developing skin cancer.

This uses devices that radiate light of different wavelengths (polychromatic radiation devices), with a maximum emission between 300 nm and 320 nm.

Psoralen UVA therapy, abbreviated as PUVA therapy, uses a substance before irradiation that makes the skin more sensitive to light (photosensitising substance), applied either in the form of a tablet or externally by a bath or an ointment applied directly onto the skin. 8-methoxypsoralen (8-MOP) is generally used as a photosensitising substance, which makes the skin receptive to UVA light (320-400 nm).

In this treatment form, a photosensitising substance is taken before the irradiation in the form of tablets.

Especially common is this therapy, in which an ointment containing 8-MOP is selectively applied to the psoriasis lesions (typically on hands and feet) is used, where an enhanced UVA photoeffect is desired (psoriasis lesions)

8-MOP may also be dissolved in water and then used as hand or foot-bath as a sensitising agent for the phototherapy. This is then called topical bath-water PUVA.

Targeted UVB therapy of therapy using an excimer laser has been possible for the past 10 years. This made it possible to apply the healing UVB light of wavelength 308 nm in a targeted way directly to the affected skin areas for the first time. Various national and international studies demonstrate that in 85% of cases the skin areas receiving targeted irradiation healed after 10 to 12 treatments.

The psoriasis-free time of the treated areas is comparable to that of conventional phototherapies. For example, there is a relapse-free time after a PUVA/balneo-phototherapy treatment of approx. nine to 12 months.

The most important benefits are:

In 2006 the targeted UVB therapy using excimer laser was included in the S3 guideline for psoriasis and it is specifically recommended for small area psoriasis affecting a body surface area of below 10%. Therefore, it is particularly suitable for: 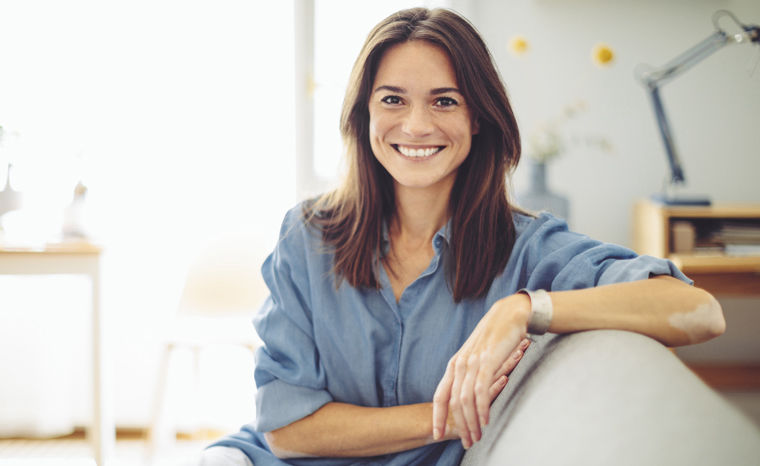 In patients with moderate or severe psoriasis a topical or phototherapy alone can often not bring about satisfactory improvement. In these cases, systemic treatments will be necessary: Additional treatments with medications in the form of tablets, injections or infusions.

A distinction is made between:

Many criteria must be considered, since the decision in favour of any potential medication is strongly dependent on the individual's state of health, for example:

These drugs should be used only after a detailed consultation and examination by physicians, who have experience with these treatments.

The following conventional systemic treatments have been included in the S3 guideline Psoriasis therapy and are mostly used in Switzerland:

Apremilast, approved since July 2015 for the treatment of moderate to severe common psoriasis, works by reducing the activity of the so-called phosphodiesterase 4, a natural substance in the body's cells. This helps to reduce the inflammation factors in the inflammatory cells, which play an important role in psoriasis.

The substance is taken in the form of tablets and leads to a significant improvement of the psoriasis on the skin, scalp and nails and also leads to a rapid reduction of the itching. Due to its efficacy in psoriatic arthritis, apremilast also helps when joints are involved.

Ciclosporin, a ring-shaped peptide with immunosuppressant effect, has been approved in Germany as a medication for the treatment of the psoriasis since 1993. The S3 guideline for psoriasis treatment recommends ciclosporin for induction therapy in moderate to severe common psoriasis in adults who do not show the desired response to a treatment with topical therapy and/or phototherapy.

Within the EU there are additional medications in use, which are not approved in Switzerland for the treatment of psoriasis. Thanks to their good efficacy, they are used in individual cases for psoriasis treatment, following individual cost approval by the respective health insurance provider.

Methotrexate is approved in Switzerland for the treatment of common psoriasis and is used either in the form of tablets, or, more commonly, as an injection once per week (better bioavailability). Since methotrexate also works well in many cases of psoriatic arthritis, it is also the preferred treatment in cases involving joints.

Fumaric acid esters have been approved in Germany since 1995 for the treatment of common psoriasis. They are dispensed in the form of tablets with gradually increasing doses to adapt the body to the medication. The S3 guideline confirms good efficacy of the fumaric acid esters in induction therapy and also in long-term therapy because of their favourable benefit-risk profile.

This new class of drugs is produced biotechnologically to intervene in the immunological processes in the body. By acting as antagonists of the so-called cytokines, they mainly block inflammatory processes. Cytokines are inflammation-triggering or inflammation-controlling messengers that are released by the cells of the immune system. These messenger substances include the tumour necrosis factor-alpha (TNF-α), interleukin-12/23, interleukin 17 and interleukin 23.

Biologics are proteins that cannot be taken as tablets because they would be destroyed by gastric acid. They are therefore administered as an injection either under the skin (subcutaneously) or by the doctor as an infusion into the vein (intravenously).

Biologics act very quickly compared to the classic systemic therapies, so that many patients report an improvement in symptoms within the first few weeks of treatment.

A safety assessment is made for these drugs, which includes the exclusion of tuberculosis, hepatitis B and C and HIV. In this way, we can prevent undetected infections or other medical conditions from preventing a successful therapy.

Like conventional and designed chemical systemic therapies, they are only used in cases of moderate to severe psoriasis, namely when conventional therapies (including light therapy) have not shown sufficient success, may not be used for medical reasons or were not tolerated.

Moderate-to-severe psoriasis is defined by an affection of more than 10% of the body surface, or by a severe limitation of the quality of life.

Biologics cost more than CHF 25,000 per year in Switzerland, and health insurance companies check on a case-by-case basis whether a therapy is covered. They should only be administered after the criteria have been checked, and only the dermatologist or rheumatologist may prescribe them.

Thanks to the recognition that the cytokine TNF-α plays a major role in the development and maintenance of the inflammatory process in moderate to severe plaque psoriasis, innovative and effective drugs have been developed in recent years. TNF-α blockers specifically intervene in the inflammatory process and can bring it to a standstill. The inhibitors of this messenger substance have a good effect. These drugs have been on the market for the longest time of all biologicals and there are therefore good long-term observation data. The effect of these drugs has revolutionized psoriasis therapy and many patients are treated with them. The rate of skin cancer, but not other types of cancer, can be slightly increased, so regular check-ups by a dermatologist are recommended. Also the rate of infections, e.g. of upper respiratory tract infections, is slightly increased.

The part of the immune system that triggers psoriasis is driven, among other things, by certain T cells that are dependent on the messenger substance interleukin 23. Inhibitors of interleukin 12 and interleukin 23 are injected in the doctor's office at intervals of 3 months. Despite the few injections per year, the effect is approximately comparable to the TNF-α inhibitors. This substance class has a good safety record. There is a genetic marker which, if determined before therapy, can give an indication of the response to the drug.

Scavenger cells, which in our understanding play an increasingly important role in triggering psoriasis, are activated by the messenger substance interleukin 17. The available inhibitors of this messenger substance have a very good effect. Superficial fungal infections, which sometimes occur as a side effect, have so far been well treated.

This information is in constant development - your dermatologist can inform you about the current status of treatment options and their risks.

According to larger studies a psoriasis treatment is particularly successful if the patient and the treating physician have on one hand, clearly defined the patient's expectations, and the realistic aims of the therapy on the other hand. Dermatologists, who are DermaNet members, define these aims jointly with the patient. The improvement of the patient's quality of life is the main focus and not just the skin specific treatment aims. Co-morbidities, such as high blood pressure, excess weight, depression, etc. are also carefully monitored.